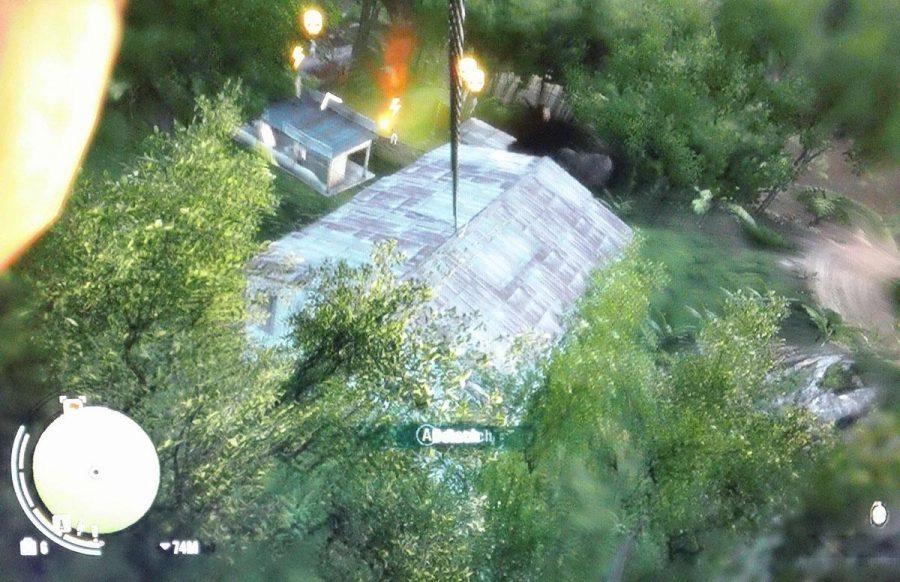 Far Cry 3 is insanity in a disc.

Every theme the game deals with is dark. Kidnapping, slavery, drugs, drug trafficking, torture, revenge, murder and (of course) the main character’s complete loss of innocence. And that’s just the main story.

All kinds of reckless abandon for human life can be enjoyed via the side missions and the world’s chaotic random incidences.

The game begins with a montage showing the main character, Jason Brody, and his over-privileged, college aged, SoCal friends partying their butts off all around the South Pacific.

The trouble starts with an unplanned skydive onto a tiny backwater island. Next thing you know you’re coming to in a bamboo cage surrounded by pirates. Turns out Jason, his two brothers and his friends are all now captives of a group of pirates who deal in modern slavery. Jason and his brother are able to escape, and that’s where the player takes over.

The rest of the story focuses on getting Jason’s friends back and getting off the island, but not before killing the villains responsible. The antagonists are Vaas, a sociopathic scoundrel with a flair for the dramatic, and his evil genius boss Hoyt. Pretty soon my main motivation in the plot changed from rescuing my friends, to killing Vaas.

The reason why Vaas is so easy to hate is he’s the Dr. Evil type of bad guy who leaves you and your girlfriend in a burning building and walks off laughing. He kills people for fun, and his death becomes the main character’s reason for being. Jason focuses less and less on escaping the island in his own transformation in the story.

Jason’s conversion from a spoiled, whiny man-child into a damned good killer is one of the deeper concepts in the plot. It felt rushed though, as Jason doesn’t seem to be going crazy for the first few missions, and then all of a sudden on return from saving a friend, he has suddenly changed.

He’s harsher, he’s meaner, he’s a dick to his girlfriend for no reason and in an ironic turn, the more friends he rescues the less connected he is to those people. Each advance in plot reveals less of a human and more of an uncaring warrior.

The story is good, but Far Cry 3’s real strength is its game play.

You’ll need all that playing time for training because Far Cry 3 isn’t forgiving. Running head first into most encounters with no planning or stealth receives the real world equivalent of trying to kill several heavily armed pirates by yourself as a recently graduated liberal arts major.

The diverting co-op entertained me and my roommate for a few hours. The two of us took on several of the maps in the co-op campaign designed for two to four people. Our duo found a very good level of challenge that we could still tackle successfully with joy. Unfortunately I haven’t tried it with more than two people yet.

Sometimes other people will constantly run in place until you restart the game and animals will disappear mid-skinning, robbing the skin used for crafting.

In about 5 hours of co-op we saw glitches from the sound completely cut off until we quit and restarted the level, to player two being paralyzed until we exited and re-entered split screen mode. Annoying, but not game destroying certainly.

Compare that to seeing three or four bugs in single player in over 30 hours, Far Cry’s bread and butter, and co-op needs work. But there were so many outposts, radio towers, side missions, overall open world chaos and, of course, the main story to distract me from tiny glitches and school work.

The Character models look realistic down to pimples and wrinkles that become more and more obvious as people get in the player’s face. Facial expressions and voice acting also helped to make me feel like I was really on Rook Island.

I’m sure I’ll be playing this one for a while, and probably again in the future. Its co-op has so far become bro time with a friend who spends loads of time with his new wife, so the replay-ability seems pretty high after quite a bit of dedication.

I’d definitely recommend picking a copy up if you have the means.