CSU Yoga Club partners with Off the Mat, Into the World for a philanthropy event to end sex trafficking in India 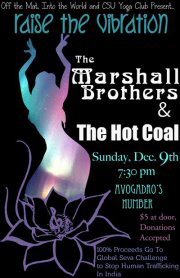 Most people think of yoga as a kind of stretch for rich people, but that’s not the case.

“Yoga is more than you typically think of, it’s not just a stretch or an exercise, it’s a lifestyle,” said CSU Yoga Club officer Katie Earixon. “One of the tenets of yoga is to respect others and do good. It comes from Buddhism.”

That explains why the CSU yoga club is teaming up with Off the Mat, Into the World, a non-profit program that stresses the concept of seva.

In accordance with seva, the CSU yoga club is putting on a benefit concert at Avogadro’s Number.

“The money goes to Off the Mat, Into the World and the Global Seva Challenge, which is a relief effort for human trafficking in India,” Heywood said.

This isn’t the first time the CSU yoga club has raised money. Last year, the club put together Rock the Plaza to raise money for an orphanage in Uganda.

“Every person deserves to have a good life. When you look at it from a global perspective, even people in Colorado should help. It’s a good opportunity to give back,” said Yoga Club officer Logan Maxwell. “It’s a chance for the CSU yoga community to work together and put on a philanthropy event.”

At the event, Heywood said, “It’s a $5 donation to get in, and we’ll be selling yoga clothes and jewelry. The clothes are donated by a yoga studio in Denver, Bliss Yoga, and the art is made by local people.”

“100 percent of proceeds go to efforts — we’re very careful to work with pre-existing organizations,” she added.

But of course, there’s more reasons to attend than to buy clothing and jewelry. The Hot Coal and the Marshall Brothers will be performing as well.

The Marshall Brothers’ Tobias Bank said they’ll be playing at the event because “Claire approached asking if I would like performing for good causes and to collaborate with local agencies.”

He supports the event, as well as where the money is going. He said, “It’s not US groups saying this is how things are, this is how it should be. It’s people who are already there and already making a difference.”

He summed up, “It feels good to do good things.”

“It’s a way to give back,” Maxwell agreed.

Heywood admitted, “It was a challenge to find a local place to have the event for free. Most venues wanted to charge us lots of money, which is why Avogadro’s is so great.”

She continued, “My favorite part is connecting with the community, having an event off campus to connect with folks who live in town.”

Earixon said, “We have no idea how many people will show, but hopefully a lot!”

To learn more, go to www.facebook.com/pages/CSU-Yoga-Club