April Fools: Have you seen this joint? 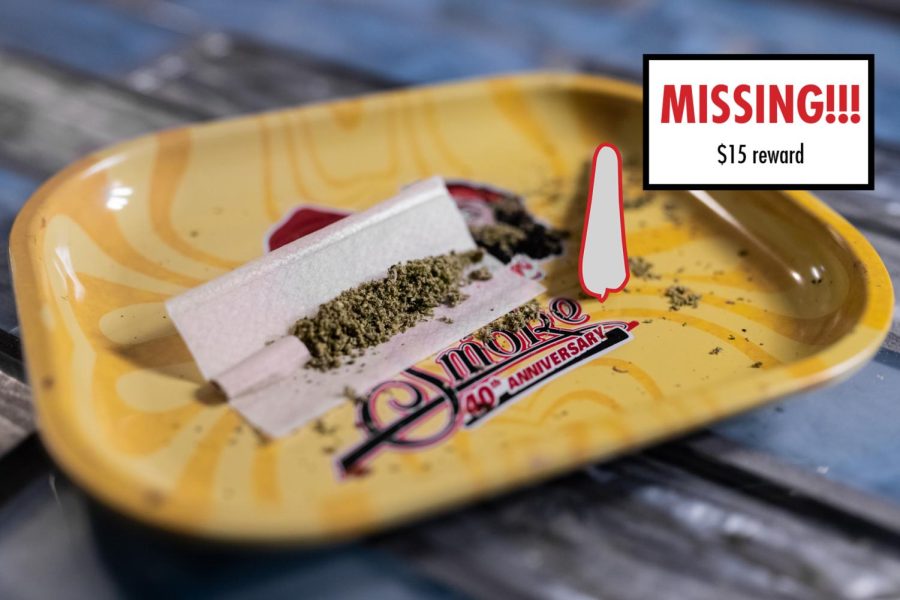 The crime scene of a missing joint March 29. (Photo illustration by Look! A Seal | The Daily Bilge)

The sun shone across a spacious Colorado backyard. The birds were singing, the weather warming — everything gearing up for the spring harvest. Only this spring cleaning took more away than intended.

Meet Mary Jane, or MJ as she asked to be called. MJ is a homegrow cannabis enthusiast here in Fort Collins. Three times a year, she trims the buds off her plants at home and creates a homegrown batch of cannabinoids. She even breeds the plants herself.

“I started with some seeds from a dispensary a few years ago,” she said. “But after my third time paying for seeds, I decided I’d take my chances at breeding the plant myself.”

Inside her house she keeps a small container with all the seeds that have made successful plants, all with their own names.

“Last year, I focused more on sativa and came up with these three: foggy haze, orange crush and the pièce de résistance, cherry diesel, which I bred with last year’s strongest indica, kush it up, to breed this year’s plants.”

But this is where the problems started.
“I took it out to the patio so I could try out my masterpiece, but I forgot a glass of water, so I went back inside. When I came back, the joint was gone.” -Mary Jane, local resident
“I harvested the first bud off the new strain, annihilation, and it gave tremendous readings,” MJ said.

The name annihilation seemed apt, as the buds she had drying had a blue hue, similar to the movie of the same name. A whiff of their powerful scent could be smelled from across the room while the jar was sealed.

“Annihilation has a THC percentage of about 64%,” she said.

For reference, 15-30% THC-content flower is legally available at dispensaries. A small joint of this flower could knock back even the most hardcore stoners into a haze — hence the name annihilation.

“I rolled up a small one knowing the power of this flower,” MJ said. “I took it out to the patio so I could try out my masterpiece, but I forgot a glass of water, so I went back inside. When I came back, the joint was gone.”

MJ said her joint was stolen last weekend before she had a chance to smoke it. There are no cameras on the property, no footprints and no sign of entry to the backyard. Police didn’t look too hard into investigating it since the amount stolen was less than half a gram.

“They just ignored me because it wasn’t worth much money,” she said. “But I care about my plants, man. I hate to think what happened to that poor bit of flower, cold and all alone.”

Her neighbors had differing opinions.

“It smelled like a skunk sprayed itself to death that night,” said MJ’s rear-fence neighbor. “That house always smells like weed, but that night was something special. If she didn’t smoke it, I’m going to need to call animal control to come and get that skunk carcass.”

Other neighbors reported the same extreme smell that night.

“I suppose it’s entirely possible,” MJ said when asked about the smell. “64% is quite the trip, man.”

We may never have definitive evidence of what happened to that specific joint — perhaps it too was annihilated along with the memory of the smoke it created.

Reach Pirate of the Collegian Graybeard Acri at cannabis@collegian.com or on Twitter @Guy1376.