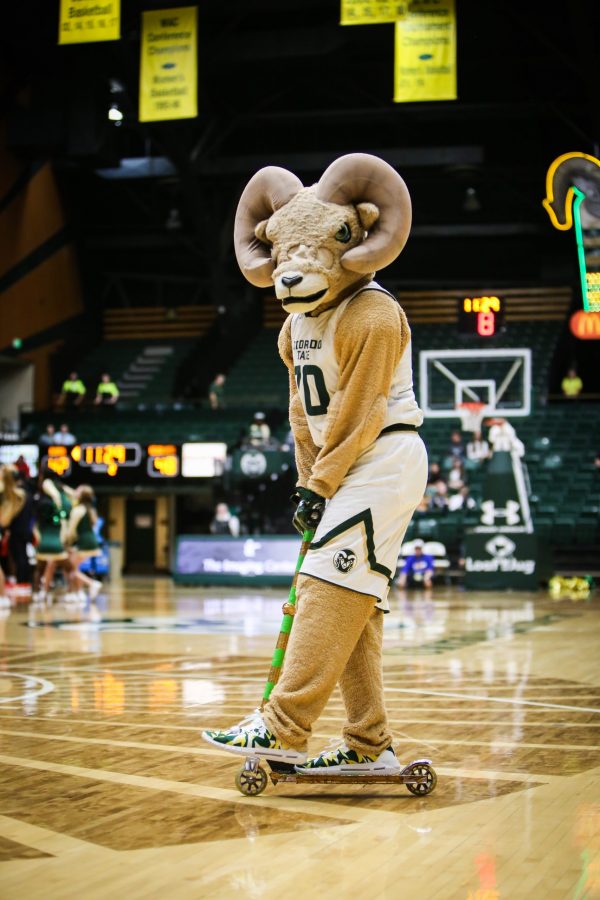 Cam the Ram rides a scooter during the game against San Houston State on Dec. 8. The Rams won 71-65. (Tony Villalobos May | Collegian)

Cam, who is actually architecture and design student Julio Flores, was reading to students at Bennett Elementary School when the masked activists rushed in, applied a chloroform-soaked rag to Cam’s face and quickly exited the classroom, injuring several children in the process.

The identities of the five rescuers have been protected by PETA leaders due to threats of deportation from President Donald Trump.

“Those damn hippies can eat all the grass they want in New Zealand,” Trump said in regards to the rescuers.

The act of resistance has been praised by animal rights groups internationally with some comparing it to the Stonewall riots of 1969. Many have cited Cam’s visible lack of emotion as justifiable evidence of mistreatment by the school.

I’m happy to see the enormous impact our non-misguided actions have caused on all societies and all species.”-anonymous PETA participant.

“He always has this uncomfortable smirk that feels so hollow and vacant,” said Tracy Adams, horticulture major. “It’s like he never changes expression. Like he’s trying to hide something.”

“I’m no vegan or nothing, but he always creeped me out,” said undeclared student Jim Buck. “Everytime I saw that fool I thought furries were invading campus and shit.”

The rescuers are incredibly proud of their accomplishment.

“I’m happy to see the enormous impact our non-misguided actions have caused on all societies and all species,” an anonymous participant said. “The other day, a squirrel came up to me and was like, ‘You did great today. Mother would be proud. Next stop, KFC headquarters.’ It’s so great hearing positive reinforcement.”

Flores could not be reached for comment, however he submissively holds his head down every time he’s in the presence of the rescuers, forever grateful for their selfless actions.

Editor’s note: This is a satire piece for April Fools Day. Real names may be used in fictitious/semi-fictitious ways. Those who do not like reading editor’s notes are subject to being offended.

Yeehaw Junction reporter Henry Weatherman can be reached at entertainment@collegian.com or on Twitter @NetherlandHenry.